We are proud to commemorate the 150th anniversary of the Civil War with the Civil War Melodies Block of the Month.  This block of the month combines beautiful blocks and reproduction prints that come together to celebrate the songs of the Civil War.  Sarah Maxwell from Homestead Hearth says she’s finally arrived now that she has been featured here on the Jolly Jabber, but we’re equally honored to have a quilter of her BOM fame share with us today! We hope that you join in on the block of the month fun to commemorate such an important time in our nation’s history! 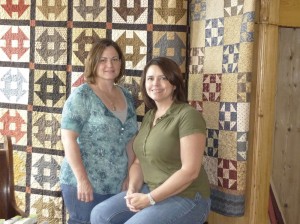 I was so excited when I was invited to guest blog on the Jolly Jabber blog about the new Civil War Melodies Block of the Month. There are certain milestones in a quilter’s life that mark success, which include having a quilt published in a magazine, designing your own patterns, winning at a national quilt show and being on the Jolly Jabber. So I can now say I “have arrived.” Thanks, Kimberly.

Five years ago Dolores Smith, my business partner, and I came up with the idea of doing something really big to celebrate the 150th anniversary of the Civil War. We both love reproduction fabrics and find the history of the 1860’s so fascinating. We approached Marcus Fabrics about producing fabric for the project and were so thrilled when the queen of reproductions, Judie Rothermel, agreed to work with us on the quilt series. Civil War Melodies celebrates the songs from the North and South that captured the mood of a nation as it moved from differing viewpoints to armed conflict and then on to trying to heal a fractured nation. Some of the songs are still popular today, like Battle Hymn of the Republic or The Yellow Rose of Texas. Others are long forgotten but still evoke deep emotions when remembered, like We Are Coming, Father Abr’am. 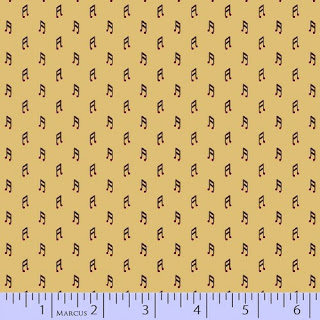 Then, the rest of the line fell into place. We love that Melodies is a bit brighter and lighter than past lines. Reproduction fabrics aren’t all dark & dreary! It’s hard to pick a favorite block, but I really love The Bonnie Blue Flag block because it incorporates a fabulous cheddar print. Cheddar just makes quilts pop and they don’t surface very often, so that print is a great addition to the stash along with appearing in the quilt. Dolores loved working on all of the blocks because there are less half square triangles than in years past and the blocks look very simple and old. Her favorite would have to be Battle Hymns because it is a tripple four patch design, and we could probably sew those blocks in our sleep.

Civil War Melodies BOM program starts in January, so sign up soon for this ever-popular club!